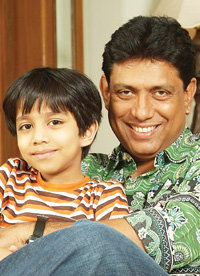 Afzal Hossain is a renowned person on the television actor circuit. His wife is Tazin Halim who is a fashion designer. They have two sons. From the mid-1970, his first appearance on the small screen; he has become a romantic hero. After that, his talent is spread out many branches of our cultural area. Afzal completed graduation from the Institute of Fine Arts (IFA). Then He has trained in graphics design, illustration in particular, which help him in increasing his career. In 1975, he connected Dhaka Theatre and enlisted in BTV as an actor in the year. He says that Drama personality Jamil Ahmed showed him the way to apply methods in practical work. In Dhaka Theatre, he got the opportunity to apply his knowledge and creativity in art. He worked in the group as a designer and an actor as well. He carried on theatre for nine years. He is the writer of three novels and a collection of stories jointly with Imdadul Haq Milon. He is working with his production house. He is working for his future success in media sector.