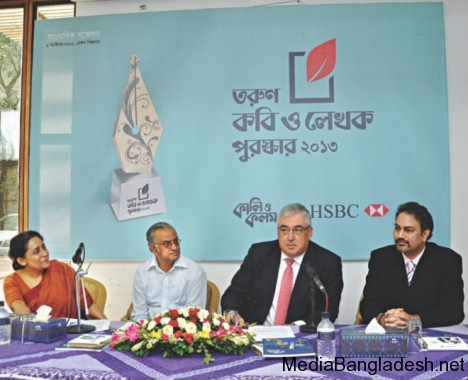 Award giving Organisers of HSBC-Kali O Kalam Young Poets and Literature Awards 2013 have called for submission of entries for 2013. The Awards will be given for books in five categories—poetry; short stories and novels; essay, research-based works and drama; research and essays on the Liberation War; and children’s and adolescent-literature (included poetry, stories and novels.

Young poets and writers are requested to submit their books published during July 2012 to June 2013 for the award. Entrants should submit their national identity card or other related documents as proof of their age and originality of their literary works. Monthly literary magazine Kali O Kalam and HSBC initiated the award in 2008, says a press release. On the occasion, a press conference was held on October 9 at Bengal Cafe in Dhanmondi. Andrew Tilke, chief executive officer of HSBC Bangladesh; Talukdar Noman Anwar, head of communication department of HSBC; Luva Nahid Chowdhury, member of editorial board of Kali O Kalam; Abul Hasnat, editor of Kali O Kalam, spoke at the event. The winners will receive Taka 1 lakh each. Authors or writers, aged between 18-40 years, are requested to submit their books at Kali O Kalam office, Bengal Centre, by December 22. Awards will be given in the first week of April, 2014.