The total area of Bangladesh is 56,977 square miles (1,48,393 square kilometer). In 2011, the estimated population of the country was 142,319,000. In the Map of Bangladesh, 8 divisions and districts are showing  separately.  Bangladesh is a sovereign state & join its borders with India from west, north, east sides except for Mayanmer in the south-east & Bay of Bengal in the south.

This Bangladesh Map also highlights the capital city, other major cities, districts, and political map of  Bangladesh. Dhaka, the capital of Bangladesh is clearly stands in the center of the map. Dhaka is located on the banks of River Buriganga. It is known as the “City of Mosques”.

The other main cities of Bangladesh are Chittagong, Khulna, Rajshahi, Sylhet, Rangpur, Barisal, Mymensingh are also administrative divisions of the Bangladesh. Dhaka and other 8 divisions divided into 64 districts.


How many Divisions in Bangladesh?

Barisal division is situated in the south of Bangladesh, Boarding division are Khulna in the west, Chittagong in the south and Dhaka in the north.

Summary of Chittagong Division in Map of Bangladesh :

Summary of Dhaka Division in Map of Bangladesh :

Dhaka is the situated in the center of Bangladesh sounding by Rajshahi, Khulna, Barisal, Chittagong and Mymensing.

Fact of Khulna Division in Map of Bangladesh :

Khulna Division is situated in the South-West Side of Bangladesh. Dhaka and Barisal is in the East side of the map of Bangladesh.

Rajshahi Division is adjourn to Dhaka Division, just west side of Dhaka. Other Bordering divisions are Mymensing in the East and Rangpur in the North.

Summary of Rangpur Division in Map of Bangladesh  :

Rangpur Division is situated in the north side of Bangladesh. Boarding division is Rajshahi in the South, Mymensingh in the South-East.

Summary of Sylhet in Map of Bangladesh :

Sylhet Division is situated on the North-East side the Map of Bangladesh. Sylhet is famous is for Beautiful tea Garden. 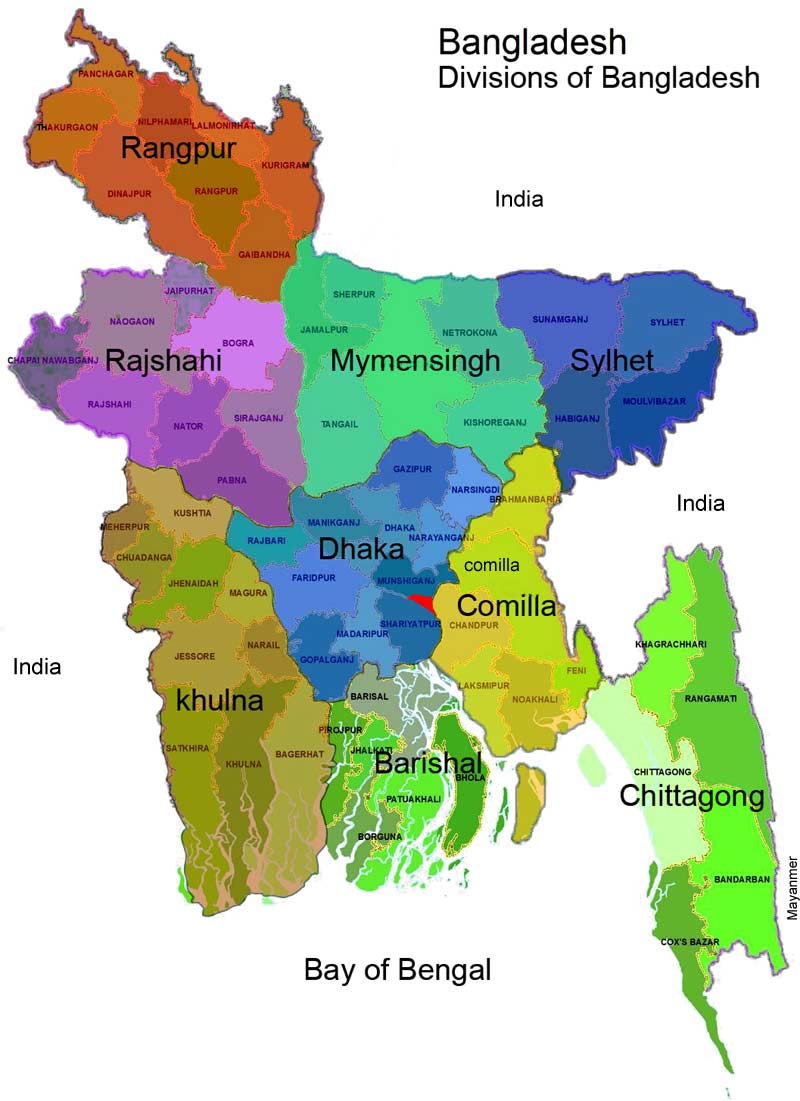 Above Bangladesh Map Picture is indicated divisions with different colors. Bangladesh map 64 districts showing under the division of Bangladesh.

Position of Divisions in the Map of Bangladesh. 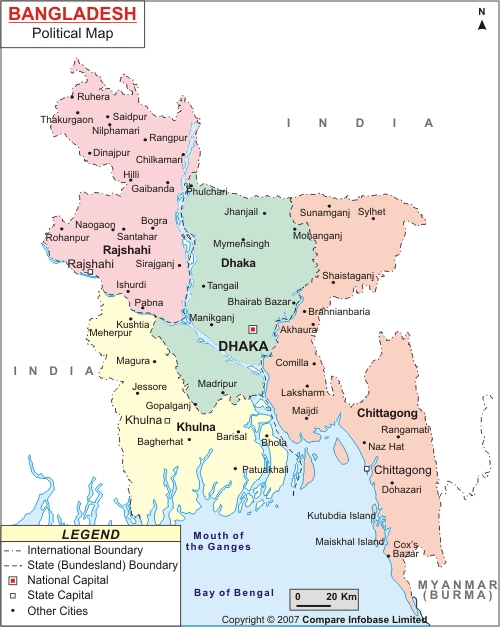 Map of Dhaka Division of Bangladesh

If you compare with Bangladeshi map old one with with new map, you will see new division that separated from old division. There are no chance to increase district, in  Bangladesh map 64 districts are existing for many years. Though we have see couple of upazila or Union were divided in upazila or union.