Grading is a standardized measurements of levels in Education.  There are different level GPA and CGPA grading system for school college and university.
Total  6 level grading systems are 1 to 6 or A to F for Primary School, High School, College in Bangladesh maintaining GPA grading system for preparation of result according to the following calculation:

Grading system in Bangladesh For school


Above grading system is applicable for all school level up to SSC Examination.

Universities  in Bangladesh can  use ‘I’ grade in case of incomplete grade and ‘W’ for withdrawn courses.

There are separate criteria equivalent to the grading system for the HSC & SSC levels to reintroduce 1st division, 2nd division and 3rd divisions or classes in proportion to grad-point average (GPA) marks.In 2009, The Bangladesh government changed to the result system for public examinations, matching the existing grades with the previous classes or divisions according to obtained marks. 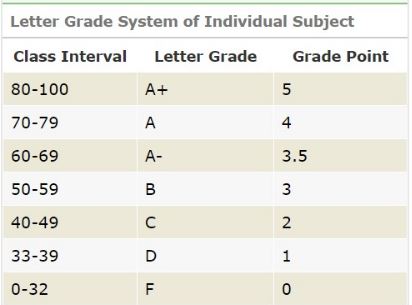 Regarding score of marks — GPA 4 or above is equivalent to 1st division while GPA less than 4 to 3 is 2nd division and GPA less than 3 to 1 is 3rd division for the students who passed SSC and HSC and equivalents in 2004 and thereafter.

Besides, the approved universities will have to fix their Cumulative
CGPA – Grade Point Average  scale (4 or 5) equivalent to 80 percent marks. Then division or class will be fixed converting the achieved CGPA to 100%  numbers. 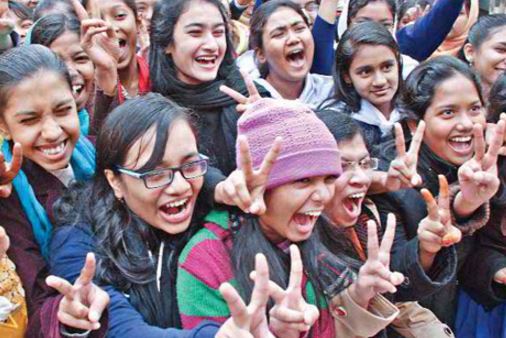 Historian George W Pierson of Yale University  writes ” According to Tradition” the first grades issued at  Yale University in 1985.  Most of the country using their own grading system (GPA) in School, College and University. And grading points also different i.e 1 to 7. Grading Points are always represented with whole numbers such as 1, 2, 3, 4, 5, 6, & 7 are the only possible grades.

Because these grading points do not represent percentages, but instead correspond with specific rubric requirements, one could theoretically answer 90% of questions on a given examination correctly, but still get a GPA 5 if the 10% they missed represented crucial problems that corresponded to the 6 and 7 grade mark-bands. Additionally, each subject has slightly different ranges that correspond with different grading boundaries.

The cgpa system in Bangladesh is considered as a leading edge of education. Each institution of higher learning is graded according to its excellence in the different disciplines of education. The grades are given based on different factors, including; achievement and performance of the faculty members and the administration.

All these factors are taken into consideration for the effective functioning of the institution including; curriculum, special programs, research, assessment and comprehensive school-level assessments. This cgpa system done in order to evaluate the quality of education provided by the college and university. Different resources are used for such evaluations like; financial accountability, student performance and efficiency, faculty productivity, student performance and efficiency, curriculum evaluation, student testing results, and other such factors.

The CGPAs are used in order to maintain the grade consistency throughout the university. The cgpa system in Bangladesh is a widely followed method among the developing countries. Each institution should be able to use this system in order to improve their current knowledge base as well as having a better performance when compared to others.

The cgpa system in Bangladesh are the ones responsible for grading the students. It will be provided with a certain format in order to make the process easier for the people involved. The major purpose of the system is to establish a sense of accountability for all those involved. The cgpa system in Bangladesh  is capable of being easily adopted by any university, and it is important to understand the different aspects of the system.

As per the education laws of Bangladesh, all education institutions are obligated to use the CGPAs grading system in order to promote and strengthen the system. The curriculum should be evaluated in an efficient manner to provide the best learning opportunities.

The CGPA’s system in bangladesh  is actually based on three major principles. The first one is the faculty evaluator, who is responsible for carrying out the grading. This person is responsible for evaluating the curriculum and all those related to the students’ progress in class, including assessment, individualized attention, and the assessment of competencies.

The third element is the committee of evaluation. This committee includes the three individuals mentioned above and there are others who carry out the various duties in connection with the evaluation and assessment of the students. There is also an instructor or teacher who is present to assist the coordinator in carrying out the work.

The CGPAs grading system in Bangladesh has proven to be effective in raising the standard of all the institutions of higher learning. There has been a good performance level among the students. In fact, they have been able to take up a challenging curriculum without compromising on the quality of education.

There is nothing wrong in giving credit for the achievement of different subjects. The cgpa system in Bangladesh ensures that there is a good correlation between the academic records of students and the grades they are given. It is like a way of reinforcing the students’ future success.

The students in the same class can be given a high rate of competency if the cgpa system in Bangladesh is used correctly. The grades will definitely reflect the actual performance of the students. The teachers and the professors can be confident about their students’ performance as well as can take an objective view of their work. The CGPAs grading system in Bangladesh has made the work easy and more efficient for the teachers. This system has also made it possible for the teachers to review the records of their students as well as give feedback about their learning experience.