Malaysia Airlines Flight 370 was disappeared on March 8, 2014 while going to China from Kuala Lumpur Malaysia. The Boeing 777-200ER of Malaysia Airlines contacted with Malaysia Aviation Authority at 01:19 pm (MYT) within one hour of its takeoff while it was crossing South China Sea. At 01:22 pm (MYT) on March 8, 2014, the plan disappeared from Malaysia air traffic controllers’ radar screens.

‪‪Malaysia Airlines Flight 370‬‬ was still tracked on Malaysia military radar as it deviated westwards from its planned flight path and crossed the Malay Peninsula. The aircraft left Malaysian military radar at 02:22 pm MYT while the plan was over the Andaman Sea just 370km from Penang in north-western Malaysia.


Possible end point of Malaysia Airlines Flight 370
On 24 March, 2014, the Malaysian government announced that the final location determined by the satellite is far from any possible landing place of the world, and concluded that “Flight MH 370” ended in the southern Indian Ocean.
Based on analysis of the Inmarsat’s satellite communication , the aircraft turned south after passing north of Sumatra and the Malaysia Airlines Flight 370 continued for 6 hours with little deviation in its track, ending when its fuel was exhausted.

Where searched for the Missing Aircraft 370?

On 17 March, 2014, Australia took charge of the search when the search moved to the southern Indian Ocean.
Untill January 2017, a comprehensive survey and search of 120,000 km2 of sea water about 1,800 km south-west of Perth, Western Australia yielded no evidence of the Malaysia Airlines Flight 370‬‬. 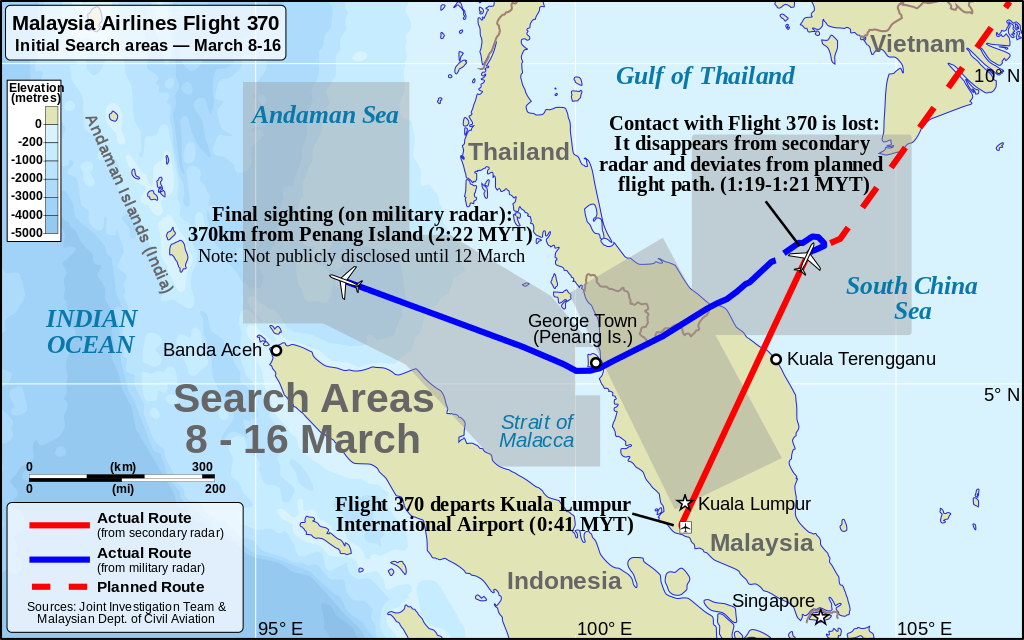 All 12 crew members were Malaysian citizens. Two pilots were among them are Captain Zaharie Ahmad Shah and Fariq Abdul Hamid