Chittagong University was established in 1966, Total Area is   1754 akrs, Faculties 862 and 311 Staffs. Total Students are 24283. The 2nd largest public university of Bangladesh is located at Hathazari, just 22 kilometers from Chittagong City.

The Port City of Chittagong in Bangladesh was not blessed with a public University for long to meet the higher educational needs of Chittagong division. There was also growing demand of the people of this region to set up a public university with various modern academic disciplines for facilitating the process of skilled and knowledgeable human resource development.

Then the Government decided to establish Chittagong University at Chittagong, the largest port city of Bangladesh during the late sixties. The decision was gradually implemented at different times. The major growth of this university occurred during the period following the emergence of Bangladesh as a sovereign  country in 1971.


Originally, the Government planned to develop it as a fully residential public university. But this goal could not be materialized subsequently due to non-availability of adequate fund from the relevant sources.

Chittagong University at a Glance. 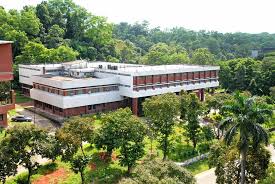 al inauguration of academic activities. After the selection of site, its foundation stone was laid on a small hill-top at the northern part of the campus in 1964 at Fatehpur, 22 k.m. away from the Chittagong city and about one kilometer away from Chittagong-Nazirhat highway. It initially started its academic activities with only four departments: namely, Economics, History, Bangla and English. In these four departments, 200 students were admitted. Professor Azizur Rahman Mallick joined Chittagong University in 1965 as Project Director. The Chittagong University Ordinance was promulgated on 25 September 1966. Professor Mallick was made the first Vice-Chancellor on 9 October, 1966. At present, thirty three departments, two institutes and one research centre under five faculties have been operating in this University in different branches of knowledge.

To offer undergraduate, graduate and post-graduate programs in keeping with internationally accepted standards to make  the products skilled & effective for the society and nation as a whole.

To create and disseminate knowledge and contribute to academic advancement in different branches of knowledge. To impart training in various fields to update the knowledge & skill of the students.

To develop the intellectual and mental faculties of the students properly through academic and co-curricular activities to help serve the society as skilled, honest and dedicated manpower.

To build up the university as a centre of academic excellence in science, commerce, social science, arts and law so as to enable the university make meaningful contributions to the furtherance of knowledge and to create a sound intellectual base of the professions.