Bangladesh cabinet approved the National Broadcasting Policy 2014 on 04 August 2014 to monitoring news, programs, advertisement, talk-show in the television and Radio.
Electronic media cannot broadcast any false, baseless information, in their news and programs.

The National broadcasting Policy 2014 of Bangladesh restricts the followings in News and Programs :

– Ridiculing the national ideas and objectives,
– Undermining any people
– Harm the unity and independent of Bangladesh
– Spark Separatism and unrest
– Create hatred amount different castes, creeds and religions
–  Personal privacy,
– Impede the state security
– Hurt religious values and non-communal  spirit
– News on any country which would be harmful to other countries
– Encourage mutiny, anarchy, and violent acts
– Inspire corruption directly or indirectly
– Ridiculing the Armed Forces and the law-enforcement agencies 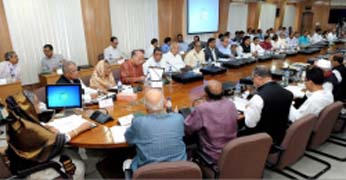 The National broadcasting Policy 2014 of Bangladesh restricts the followings in Advertisement :

– Advertising company will have to restructure significantly to follow the policy, which bans direct or indirect inclusion of the Liberation War, the Language Movement and the Independence Day.

– Professional advice should be avoided in advertisement

The cabinet secretary Musharraf Hossain said the National Broadcasting policy 2014  would be applicable for both the government and private media and the information ministry will implement the policy until formation of an independent broadcast commission.

ATCO urges the government not to implement National Broadcasting Policy 2014 until broadcasting commission is formed. Private television owners took decision after discussion the matter in a meeting at the ATCO office in Dhaka.

ATCO General Secretary Shykh Siraj said a broadcasting commission should be formed first to regulate Television and radio and stakeholder should be included in the commission to flourish it for the sake of democracy. Mossadek Ali, Chairman of Association of Television Channel Owners said a delegation of ATCO will meet the Information Minister of Bangladesh.

The Information Ministry has issued a gazette  of the Bangladesh National Broadcasting Policy on 07 August 2014.  Senior Secretary Akhtaruzzaman Talukder signed the gazette notification.