June 7, 1942 Born in Sirte to Bedouin family, part of the Berber Qadhadhfi clan. Later enrolls at Benghazi University to study geography, but subsequently drops out to join the army.

1961-66 Studies at Libyan military academy, Benghazi. Becomes enthused by rise of Arab nationalism and is particularly influenced by the example of Egypt’s Gamal Abdel Nasser.

1975 Publishes the Green Book, his political philosophy expounding his opposition to democracy, capitalism and a free media.

1980 Violently suppresses an army mutiny in Tobruk and begins policy of assassinating Libyan opponents abroad. Twenty-five are killed between 1980-87. 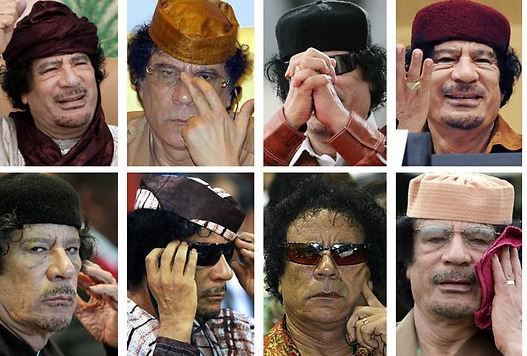 1987 Libyan involvement in the war with Chad reaches its final stage, and proves to be another military disaster for Gaddafi. Libya loses 7,500 troops, a tenth of its army, and $1.5bn equipment.

December 1988 Pan Am flight 103 from Heathrow to New York is brought down by an on-board bomb over Lockerbie three days before Christmas, killing 270 people. Libyan agents are blamed. Following year a French plane UTA 772 is blown up over Niger, killing 171 people, including the wife of American ambassador to Chad.

1998 Gaddafi expels 30,000 Palestinians from Libya in pique over Israel-PLO peace negotiations, shifts his aspirations from Arab nationalism towards Africa.

1999 Gaddafi hands over two Lockerbie bombing suspects for Scottish trial and specially convened court in the Netherlands. Abdelbasset al-Megrahi is convicted at the trial the following year.

2003 Overthrow of Saddam Hussein in Iraq forces strategic rethink. Gaddafi begins a policy of rapprochement with the west. Britain supports resolution to lift sanctions against Libya.

2009 Visits the US for first time to address the UN general assembly, intrigues Americans during visit by bringing his bedouin tent to sleep in. Megrahi, the only person convicted over the Lockerbie bombing, is repatriated by the Scottish authorities.

February 2011 Libyans in Benghazi begin to rise up against his regime. He threatens opponents with death and advances on rebel stronghold, triggering intervention from Nato.

June 2011 The International Criminal Court indicts him, his son Saif al-Islam and his brother-in-law Abdullah al-Senussi for crimes against humanity.