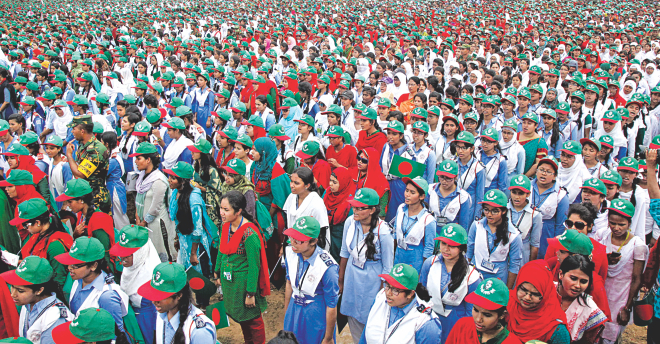 The last Guinness Book record was the singing Indian National Anthem by 121653 on May 6, 2013 organized by Sahara India Pariwar


The Cultural Ministry of Bangladesh attempted to surpass the feat by getting a far larger body of people to sing its own national anthem.

People from different corner of Dhaka city as well as Bangladesh gathered at the National Parade Square since morning 6:30 am to make a history.

Representatives of the Guinness Book of World Records observed the entire event. Their report would determine whether it finds a place in the record book.

The Prime Minister came at the venue at 10:30am and joined the chorus of thousand voice.

Before the singing began, Prime Minister Sheikh Hasina, in a brief speech, appealed to all present to boost their spirit of independence with the national anthem.

The National Parade Square ground was divided into 15 sectors to maintain order.

A big screen, set up in each sector, showed the strength of the gathering at regular intervals.

Some people fell ill in the sun. At least 30 were treated in a medical camp set up by the army at the Bangabandhu International Conference Centre.

The Cultural Affairs Ministry was in charge of the programme, while the army was tasked with the management.