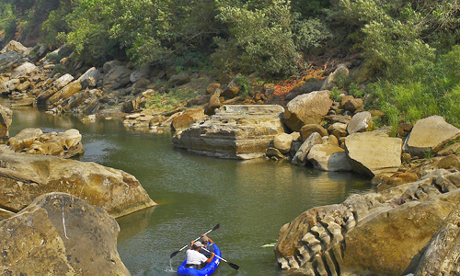 Tourism is flourishing in the deep forest of Bandarban, the home of Bangladesh’s finest lakes and highest peaks, all is not well with the “land of all tribes”. With people flocking to the region, eco-tourism has become a double-edged sword.

Experts stress sustainable tourism in Bandarban, some people have started putting wildlife in danger, by indiscriminately ravaging forests in the name of promoting tourism.

As Bangladesh is still not familiar with the concept of sustainable tourism, commercial tourism is destroying the very charms of Bandarban.

The government has declared more than six parts of Bandarban as reserve forests, about 13 species of birds and animals have become extinct in the last 10 years due to poaching and abrupt tourism.  Many parts of Bandarban wildlife has been decreased in each passing years.

The number of deer and monkey is decreasing alarmingly. With its pristine beauty, Bandarban offers great possibilities for eco-tourism, but unplanned commercial tourism will destroy the region’s tourism opportunities and wildlife, along with the lifestyle of tribal people.

Now Bandarban has become favourite tourist haunts because of the newly-built roads, availability of mobile phone signals and solar panels to provide electricity.

But the policymakers should understand the potential of eco-tourism, which would bring huge revenue from Bandarban base tourism.