Bangladeshi Tiger’s cruised to easy victory after packing visiting Caribbeans for 61 in just 22 overs in the third and final game of the three-match series at Zahur Ahmed Chowdhury Stadium in Chittagong Tuesday. The invigorated home side, which is out there with all its might to win the game, scored 62 in 20 overs losing the wickets of Imrul Kayes and Shahriar Nafees.

Imrul failed to connect properly a delivery from Kemar Roach in the fifth over and gave a catch to Kieron Pollard. Meanwhile, Samuels bowled Nafees in the first ball of eighth over.


Spinner Shakib Al Hasan ripped through the West Indies batting line up after the pacers – Nazmul Hossain and Shafiul Islam – had initiated the havoc removing top two batsmen in 11 overs.

Kieran Powell scored 25, the highest run by any Caribbeans batsman in the match, followed by Carlos Brathwaite who is only other batsman to score a double figure.

The win would earn a kind of solace and revitalise for the upcoming Test series the hosts who lost the previous two ODIs held at Sher-e Bangla Stadium in the capital.

Pacer Nazmul Hossain began the wrecking in sixth over deceiving opener Danza Hyatt to give a catch to Imrul Kayes in the slip. In the 11th over, Shafiul Islam, another pacer, came up to remove Marlon Samuels.

Nasir Hossain joined the fold to cause havoc to the Caribbeans squad. After bowling out Kieran Powell in the second ball of the 12th over, he took the catch of Kieron Pollard in the next ball.

Shafiul sent back Darren Bravo in a superb delivery in the next over.

Darren Sammy, the Caribbeans captain, fell victim to leg before as former Bangladesh skipper Shakib delivered his first ball in the match. In his second over, Shakib bowled Denesh Ramdin.

Tattered totally, the West Indies batsmen had no clue how to stay in the crease. Suhrawadi Shuvo appeared to add to their miseries by taking catch of Andre Russell in his own ball in the 17th over.

Then it was all Shakib’s. He trapped Barthwaite leg before in the 20th over and bowled Anthony Martin in the 22nd over to post a brilliant four-for-16 figure as a Bangladeshi bowler.

Out there in gallery, Bangladesh supporters and fans were on the moon. 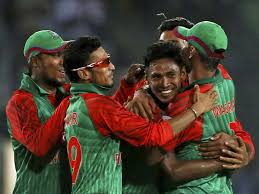 Start of the match, which was scheduled to begin at 1:30pm, was deferred by half an hour due to a wet outfield caused by rain.

The Caribbeans won the second consecutive ODI against host Bangladesh by eight wickets at the Sher-e-Bangla National Stadium in the capital’s Mirpur area on October 15.

On October 13, West Indies won a 40-run victory in their first ODI at the same venue.

Bangladesh, however, defeated West Indies by three wickets with just one ball to spare in the one-off Twenty20 international on October 11.

One of the two Test matches will take place in Chittagong on October 21 while the rest one in Dhaka on October 29.