Sundarbans of Bangladesh is the largest mangrove forest in the world. It situated on the Ganges-Brahmaputra Delta at the point where river merges with the Bay of Bengal. Sundarbans is the natural history for its array of trees and wildlife.

The Sundarbans was declared as a Reserve Forest in the year 1875. About 32,400 hectares of the Sundarbans have been declared as three wildlife sanctuaries, & it was recongnized by as the UNESCO World Heritage Site in 1999.

As the forest is situated on the south of the Tropic of Cancer & bounded by the northern limits of the Bay of Bengal, so the forest is classified as tropical moist forest. The temperatures in the Sundarbans are fairly equable than those of the adjacent areas. The average annual maximum & minimum temperatures vary between 30º & 21ºCelcius. High temperatures occur from mid-March to mid-June & low in December & January. The mean maximum temperature for the hottest months has been recorded as 32.4ºC at Patuakhali, in the east of the Sundarbans.

In the Sundarbans the saltwater forest is situated in the south-western part where Gewa, Goran Keora Ora PassurDhundul , Bain & other rhizophores, & Hantal dominate. The typical mangrove species dominate the central part of the forest. The moderate saltwater forest covers most of the southern parts of Khulna & Bagerhat districts where Sundari is the dominant species.

There is a thick mat of the nipa palm or ‘Golpata’ by the side of almost all the canals. The moderately freshwater zone results from the large amount of water, which flows down the Passur, Haringhata & Burisher, maintaining the surface water at a lower level of salinity.

Royal Bengal Tiger is the spectacular of Sundarbans, the other notable mammalian fauna are Spotted deer, Barking deer, Rhesus macaque, Jungle cat, Leopard cat, the Indian porcupine, Otter, wild boar deer, wild boar constitute the main prey for the tiger. Some species including the Bengal tiger are rare in the World.

The ecological variety of the Sundarbans supports large different kinds of birds. Among the total number of species recorded, most are resident. Over 50 species are known to be migratory & are mostly represented by the waterfowls. The egrets, storks, herons, bitterns, curlew, numerous other waders are seen along the muddy banks. There are much class of gulls & terns, especially along the seacoast & the larger waterways. Accipitridae (kites, eagles, vulture, harrier etc) is represented by about 22 species. Nine species of kingfishers are available in the forest. The rich avifaunas of the forest include species of woodpeckers, barbets, owls, bee-eaters, bulbul, shrikes, drongos, starlings, mynas, babblers, thrush, oriole, flycatchers, & many others.

Of about 50 classes of reptiles the largest member in the Sundarbans is the Estuarine crocodile some of which may attain a length of about seven metres. Although once they were abundant in this mangrove habitat, their total number is now estimated to be around 250. Species of lizards, including the Monitor Lizards Varanus, turtles, & snakes are well-represented. Among the snakes, the King Cobra, Russell’s Viper, Rock python & several classes of sea snakes are notable.

Only eight species of amphibians have been reported from the Sundarbans. The green frog is mostly available in the mangrove forest. The other forest amphibians include the Skipper frog, Cricket frog , Tree frog & the common toad. 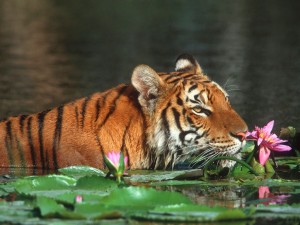 The most important value of the Sundarbans lies in its protecting role. It helps hold coastlines, reclaim coastal & settle the silt carried by the rivers. The estuary is a good breeding centre for many fishes. Several plant-based industries have been developed here. The most important economical value are the newsprint & hardboard mills in Khulna. The raw material of the Mills for the former is gewa & for the latter sundari. Other important plant based industries are match factories & boat building. The forest is a good source of fuel, tannins, thatching, wooden articles, medicinal plants, & fodder. The forest is also a major source of honey & bee wax.

Tourist are mostly visit Katka, Hiron Point, Dubhar Char and Tiger Point in the Sundarbans. Katka attracts tourists for its wildlife. There is a forest rest house here & a overlooking tower. Hiron Point also has a rest house & an observation tower. Dublar Char is an island with a beautiful beach. The other attraction of the island is the fishing activities that take place every year between mid-October & mid-February. Fishermen from other places of Bangladesh, especially from Chittagong, assemble here during the period to catch fish & dry them on the sunny beach. The honey collectors go into the forests during April-May.


Salinity of the area apparently influences the regeneration density which decreases with increasing level of salinity. Salinity appears to have little manipulated on these variations. Variation in seedling employment among the three salinity zones seems to be significant. Seedling recruitment for H. fomes, E. agallocha, & other species shows highly variable values over the years. Such variation might be due to the existence of periodicity in the seed production of some species.