Rivers of Dhaka and environment

Home/International/Bangladesh/Dhaka/Rivers of Dhaka and environment

Rivers of Dhaka and environment

The gradually narrowing rivers of Dhaka, the capital of Bangladesh no longer hold water; rather, all they carry are stinky, mucky liquids. We the Dhakaites are at the mercy of policy planners who, irrespective of their political colours, appear to be deaf and dumb.

They fail to see in front of their very noses how politically inclined thugs are plundering the river resources and grabbing the riverbanks. They fail to see how owners of industrial units don’t care about the environment department’s laws regarding treating their effluents. They are mindless in channeling all the untreated raw effluents directly to these rivers — the Buriganga, Shitalakshya, Turag and Balu — the last remnants of Dhaka’s life-support.

A day will come when the people who are becoming rich by flushing their industrial filth into these rivers, their tributaries and other city water bodies, will realise that the money they earned over the years can’t buy everything — not to speak of pure drinking water. 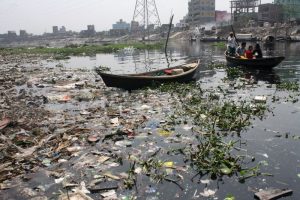 We have become so oblivious about the future sources of drinking water that we are spoiling these water sources everyday. We are giving in to our greed for grabbing wetlands, water bodies, illegally occupying riverbanks, and making quick bucks without having any social responsibility whatsoever.

We are setting up industrial units, but are totally indifferent toward discharging the effluent in an environmentally acceptable manner.

So fragile are our regulatory set-ups and so reluctant are the people manning these set-ups that nobody cares much for any sort of reprisal. During the rules of several governments, including the non-elected military-aided one, we had heard that the concerned government agencies had served notices upon industrial units flouting laws regarding effluent treatment. But, that’s all. We hardly saw any such industrial units facing closure, or penalties for discharging effluents into the rivers, ponds, canals etc.

There were at least 22 canals with full flow of clean, fresh water crisscrossing Dhaka not too many years back. Thanks to our mindless urban development and greed, all these canals are gone.

One of the former governments took an initiative to develop a circular waterway encircling the capital, which indeed was a good initiative. That will make communications by river within the city easier, and will keep the natural flow of clean water intact.

But, like many of our other good initiatives, this was also nipped in the bud. Unlike Bangkok, we did not build elevated expressways or flyovers, nor did we keep the city’s riverways operational. This is apathy.

Now that the rivers surrounding this city of over 12 million are virtually dying, some green groups, a few socially aware media outlets and a handful of civil society members are making some noises to raise awareness for saving these rivers.

But it’s a matter of grave concern that we are hardly seeing any initiatives from the part of the government in protecting these rivers, keeping their natural flows intact and the water clean. The government functionaries must awaken now to save the priceless rivers. Once the rivers are dead, so are we. Without free-flowing rivers, human civilisation can never flourish.

A recent Daily Star report quoted a research by Bangladesh University of Engineering and Technology (Buet) showing that the pollution level in the Buriganga, Shitalakshya, Balu and most parts of the Turag is so high that no living organism can survive in their waters.

A three-year research found that some invertebrates and small organisms come to life in these rivers when water flow increases in the rainy season. But these life forms completely disappear in the dry season, the researchers add. They say the waters in these rivers are affected by industrial effluents and wastewater, and also by municipal sewage disposal contamination, agro-chemicals and large amount of suspended sediments carried by upstream flow.

If the April 26 Daily Star report is something to go by, river pollution around the capital has reached such a level that the groundwater system, where the aquifers are recharged from the riverbeds, is being contaminated. From November to April, virtually no water but only stinky, mucky liquid flows in.

It’s very welcoming that a High Court bench on April 28 gave suo moto order to the government asking the latter to produce information in a month on what measures have been taken to control pollution at the industrial units and factories since the HC delivered a judgment on the matter in 2001.

The court fixed July 1 for further decisions on the issue. It’s amazing that no action was taken to contain the unabated dumping of industrial wastes into the rivers, in spite of warnings by green groups, media reports or court’s directives.

People have become captive to a state of dreadful inertia. Such inertia at government level can land us into a position when we’ll see that all the rivers around us are dead, the trees are either chopped or barren with no fruits, and all the wealth that we so fondly accumulate over the years is of no use. We’ll not be able to eat money then! Or can we?